True Story at the Denver Airport!
This is hilarious. I wish I had the guts of this girl. For all of you out there who've had to deal with an irate customer, this one is for you. An award should go to the United Airlines gate agent in Denver for being smart and funny, while making her point, when confronted with a passenger who probably deserved to fly as cargo.
A crowded United Airlines flight was canceled. A single agent was rebooking a long line of inconvenienced travelers. Suddenly an angry passenger pushed his way to the desk. He slapped his ticket on the counter and said "I HAVE to be on this flight and it has to be FIRST CLASS. The agent replied, "I am sorry, sir. I'll be happy to try to help you, but, I've got to help these folks first, and I'm sure we'll be able to work something out.
The passenger was unimpressed. He asked loudly, so
that the passengers behind him could hear, "DO YOU HAVE ANY IDEA WHO I AM?" Without hesitating, the
agent smiled and! grabbed her public address microphone, "May I have your attention please, " she
began, her voice heard clearly throughout the terminal. "We have a passenger here at Gate 14 WHO DOES NOT KNOW WHO HE IS. If anyone can help him find his identity, please come to Gate 14." With the folks behind him in line laughing hysterically, the man glared at the United agent, gritted his teeth and swore "F*** You!". Without flinching, she smiled and said, "I'm sorry, sir, but you'll have to get in line for that too.

May the fleas of a thousand camels infest the
crotch of the person who screws up your day
and may their arms be too short to scratch...
AMEN

A dedicated Teamsters union worker was attending a convention in and, as you would expect, decided to check out the local brothels.

When he got to the first one, he asked the Madam, "Is this a union house?"

Mightily offended at such unfair dealings, the union man stomped off
down the street in search of a more equitable, hopefully unionized shop.

His search continued until finally he reached a brothel where the Madam
responded, "Why yes sir, this is a union house. We observe all union rules."

"That's more like it!" the union man said. He handed the Madam $100,
looked around the room and pointed to a stunningly attractive blonde.

I'm sure you would, sir," said the Madam, pocketing his cash. Then she
gestured to a 92-year old woman in the corner, "but Ethel here has 67
years seniority and she's next."

1. Ammo troops shall shout "show us your tits" at pretty women when ever drunkenness sets in.

3. Ammo troops may not drink fruity girlie drink...... ever. Even if they are a female.

4. Ammo troops may only partake of drunken debauchery in public if they are half naked and totally drunk. If not totally drunk or half naked, they must immediately become so.

5. Ammo troops shall carry an AMMO Coin with them at all times and be willing to abide by the rules set forth in the AMMO coin code of conduct. If asked to produce your coin and you cannot, you will buy a round of drinks for all AMMO troop present. Exception: Female Ammo troops may show the crowd their tits instead.

7. Ammo troops in the company of a hot half naked babe must remain sober enough to take pictures.

8. Ammo troops must always jump into the fight another drunk Ammo troop starts. Exception: If within the last 12 hours his actions have caused you to think, "What this dick head needs is a good ass kicking", then you are absolved of all responsibility and may laugh openly while he gets the shit pounded out of him. However you must still give him a ride home from the bar.

10. Ammo troops shall whine about work to their buds at least once during the drinking season. Any Ammo troop that fails to do so, must buy a round of shooters for the entire group.

11. Ammo troops may never speak of nailing the drunk ugly girl the day after.

12. Ammo troops singing along to a song before the second round of drinks will be immediately excluded from the drinking party.

13. Ammo Troops may NEVER drink with Loaders. Exception: The loader is buying free drinks, or the loaders wife/girl friend is really hot and your trying to get in her panties.

14. Any Ammo troop caught singing along to Michael Jackson must immediately be beaten by all Ammo Troops present.

15. Ammo Troops may never speak in Ebonics while engaged in drinking with other Ammo troops. Those caught doing so may be legally killed by his fellow Ammo Troops.

16. All Ammo chicks arriving late to an Ammo drinking session must immediately and without hesitation down a Tequila shooter. This includes Ammo wives as well.

17. Ammo Wives are Ammo as well. Any Ammo wife caught not shouting "If - You - Ain't - Ammo - You - Ain't - Shit" or
"show us your tits" towards pretty women must immediately and without hesitation down a Tequila shooter and or show their tits whichever the crows prefers.

18. Ammo Troops may not have sex with girls that are strangers to the drinking crowd. You must first introduce the girl and all Ammo troops present must approve of her. If approval is not granted, you must buy a round for all Ammo Troops before you can have carnal knowledge of said bar fly.

19. Ammo troops must never hesitate when the last call for alcohol is given. They must immediate purchase another alcoholic drink. To do so is plain as rude and shows a lack of respect for the drinking establishment.

20. Ammo troops must engage in Playing of drinking games such as "Truth or Dare" if one or more female(s) with a nice rack are present.

The ultimate response to a Dear John letter... You gotta love a man like this!!!! Humor in the face of defeat.

A Marine was deployed to Afghanistan.

While he was there he received a letter from his girlfriend. In the letter she explained that she had slept with two guys while he had been gone and she wanted to break up with him. AND, she wanted pictures of herself back.

So the Marine did what any squared-away Marine would do.

He went around to his buddies and collected all the unwanted photos of women he could find.

He then mailed about 25 pictures of women (with clothes and without) to his girlfriend with the following note:

"I don't remember which one you are. Please remove your picture and send the rest back."

The Hillbilly was puzzled and asked the other Indian
what that was all about. Was the other Indian crazy or
what? "No," said the Indian. "It is our custom during
mating season when Indian men see a cave, they holler
'Wooooo Wooooo! Wooooo!' into the opening. If they get
an answer back, it means there is a girl in there waiting to mate."

The Hillbilly wandered around in the woods alone for a
while, and then he came upon a great big cave. As he
looked in amazement at the size of the huge opening,
he was thinking, "Hoo, man! Look at the size of this
cave! It is bigger than those the Indians found. There
must be some really big, fine women in this cave!" He
stood in front of the opening and hollered with all
his might "Wooooo! Wooooo! Wooooo!" He grinned and
closed his eyes in anticipation,and then he heard the answering call,
"WOOOOOOOOO! WOOOOOOOOO! WOOOOOOOOO!"

With a gleam in his eyes and a smile on his face, he
raced into the cave, tearing off his clothes as he ran.

The following day, the headline of the local newspaper read.....

NAKED HILLBILLY RUN OVER BY TRAIN

Just in case you ever got the two mixed up.  This should make things a bit more clear:

IN PRISON...you get three meals a day.
AT WORK...you only get a break for one meal and you pay for it.

IN PRISON...you get time off for goodbehavior.
AT WORK...you get more work for good behavior.

IN PRISON...you can watch TV and play games.
AT WORK...you get fired for watching TV and playing?games.

IN PRISON...you get your own toilet.
AT WOR! K...you have to share with some idiot who pees on the seat.

IN PRISON...they allow your family and friends to visit.
AT WORK...you can't even speak to your family.

IN PRISON...all expenses are paid by the taxpayers with no work required.
AT WORK...you get to pay all the expenses to go to work and then they deduct taxes from your salary to pay for prisoners.

IN PRISON...you must deal with sadistic wardens.
AT WORK...they are called supervisors.

So why is it again that we work??

Sex In The Dark

There was this couple that had been married for 20 years.  Every time they
made love the husband always insisted on shutting off the light.  Well, after
20 years the wife felt this was ridiculous.  She figured she would break him
out of this crazy habit.  So one night, while they were in the middle of a
wild, screaming, romantic session, she turned on the lights.  She looked
down... and saw her husband was holding a battery-operated pleasure device...
a vibrator!  Soft, wonderful and larger than a real one. She went completely
ballistic. "You impotent bastard," She screamed at him, "how could you be
lying to me all of these years?  You better explain yourself!"

The husband looks her straight in the eyes and says calmly: "I'll explain the
toy . . . you explain the kids." 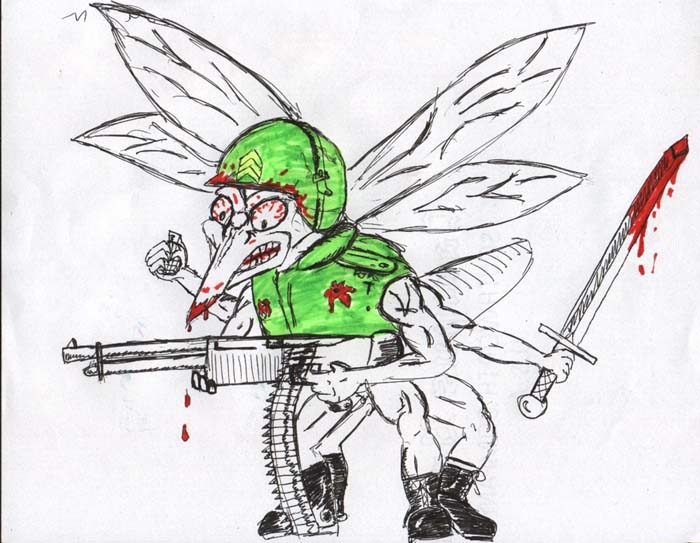 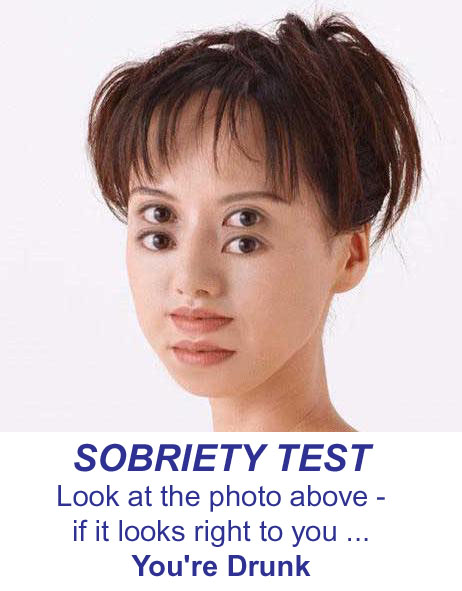 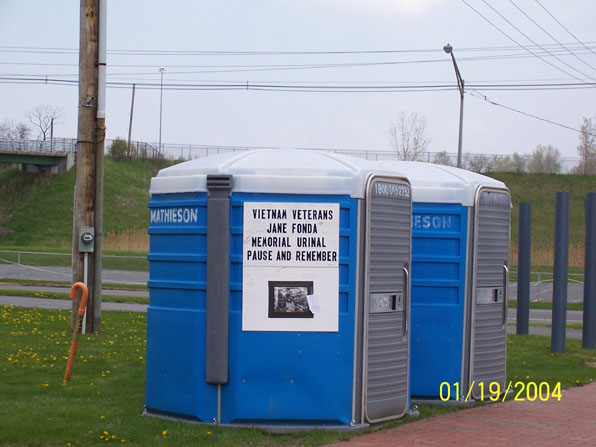